This Sunday, a group of people, protected by the Public Attorney Office (Fiscalía General del Estado, FGE) dispossessed the owners of 11 lots located in Mahahual, 500 meters away from the lighthouse. Around 20 people arrived to a lot previously “secured” by the Fiscalia and then illegally delivered it to Jesus Enrique Sanchez Pat, who has heading the dispossession operation.

The 11 owners have never been notified of any investigation nor investigative ledger or have been appointed to declare by the FGE. On March 17, via Whatsapp, one of the owners alerted the other ones that the FGE had secured their land.

About the lots, the FGE placed several plastic canvas in which the investigative ledger’s number can be read FGE/QROO/OPB/05/2369/2020, signed by the “Fiscalia Especializada en Delitos Patrimoniales” (Specialized Prosecutor Office for Patrimonial Crimes) and underneath, in big characters it states: SECURED, STRICTLY NO ENTRY”, “NOT RESPECTING THE PRESENT MINISTERIAL DETERMINATION LEADS TO PENAL RESPONSIBILITY”. The lots were also enclosed with yellow police tape forbidding entry. 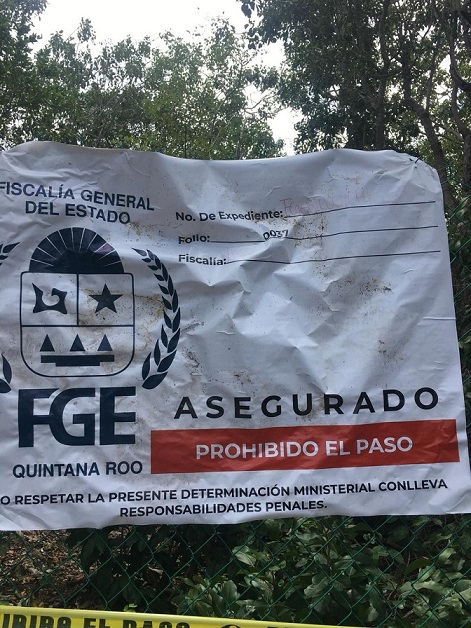 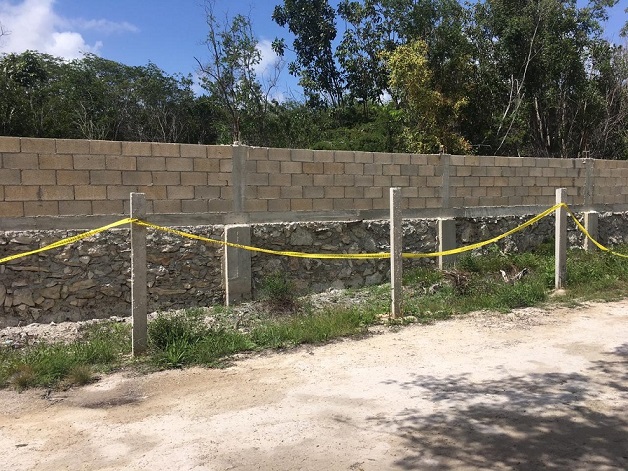 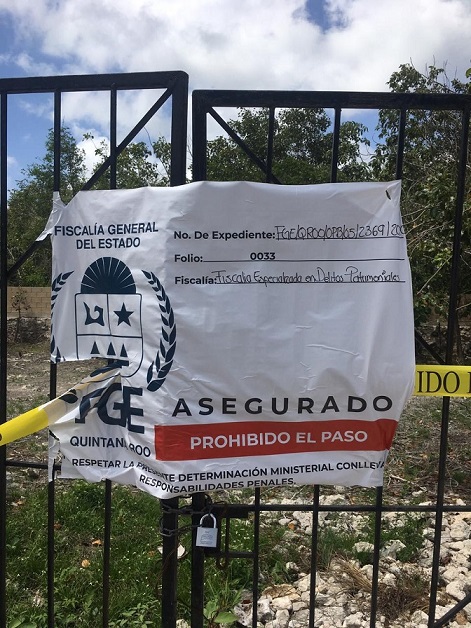 Six of the owners promoted the same amount of “amparos” (judiciary protection); nevertheless, the FGE, in the incidental judiciary protection hearings on April 12, 15 and 16, denied that the lots were secured and then illegally delivered a few days after to Jesus Enrique Sanchez Pat.

The Prosecutor’s office lied to a federal judge stating they had not secured the lots. The owners asked the federal judge to sentence the definitive suspension consisting in ordering the FGE not to deliver their illegally secured lots to any third person while the Judiciary Protection trial was active since they have never been notified of any legal procedure; but the prosecutor attached to the Fiscalia Especializada en Delitos Patrimoniales. Karina Márquez Aguilar, declared to a federal judge that: “Those facts are not true”; a few days later, Jesus Enrique Sanchez Pat took possession of a big piece of land approximately 15,000 square meters.

Jesus Enrique Sanchez Pat is son of Marleny Pat Aban and since May 2020, when the quarantine derived of the COVID-19 pandemics was ordered, tried to dispossess Playa Pamela S.A. de C.V. of their property and was indicted for that.

On the same May 2020 and after his first attempt to dispossess Playa Pamela S.A. de C.V. mother and son denounced a supposed dispossession of an adjacent piece of land which in reality is a block of lots owned by 11 proprietors that have never been called by the FGE nor appointed to relay a statement and today, after the securement that took place on March 17, fact denied to a federal judge by the FGE, the supposed “owner” Jesus Enrique Sanchez Pat, entered the lots with at least 10 of his workers, tearing the barbed wire and gates placed by the legitimate owners to then proceed to take possession of the lots sheltered by the FGE. Some of the lots already had limit walls and gates. Sanchez Pat, who claims his mother to be a “humble mayan elder” arrived with dozens of workers who placed new barbed wire on the cement posts that the owners used to delimitate their properties.


One of the lot owners, illegally dispossessed with the help of the FGE, was there and recorded Jesus Enrique Sanchez Pat, who was on the phone asking for the presence of the “detective” from Mahahual and who adds that Landy (referring Landy Noemi Sanchez Montañez, the prosecutor attached to the patrimonial crimes office) “is at the United States taking a course”.


At the place and moment of the dispossession several of the owners showed up, one of them, identified as “Andrés”, confronted Jesus Enrique Sánchez Pat, who in several occasions stated that the FGE has credited him with the possession of a big piece of land that includes their 11 lots. Police arrived to the scene but abstained to do anything since Sanchez Pat ascertained that he had an order from the FGE to take possession of the land.

Supporting Jesus Enrique Sánchez Pat was an FGE’s Ministerio Público (PA’s Office official) who recommended Andrés, one of the legitimate lot owners, to go to the Fiscalia office to check upon this affair.


OUR HERITAGE IN THE HANDS OF DISPOSSESSERS

Gabriel Rivas, from Chetumal and one of the affected by the dispossession disguised as securing performed by the FGE, complained to be linving in a lawless land: “it’s unbelievable that you can lose your heritage overnight like this, in this manner. Me and my wife found out a few days ago that our lots have been secured and promoted a judiciary protection trial and today, with the surprise that we no longer own our piece of land since the owners are different people. We have the proper deed, registered in the Public Office, we pay the land taxes, we fenced it and every now and then we come to Mahahual to spend some time in our land. It’s hard to believe, the Fiscalia never notified us of anything. We feel anger and impotence”.

On February 10 2021, Public Attorney Óscar Montes de Oca Rosales declared to the Justice Committee of Quintana Roo’s Congress, in which, failing to follow due process, pronounced himself favoring Marleny Pat Abán and her son Jesus Enrique Sanchez Pat, who were referred to without mentioning them as: “a very humble population, truly, who have been dispossessed” and about the legal process performed by the FGE ascertained that: “I have analyzed those issues and I’m onto them”.


Without even the possibility of a minimum defense and violating due process, the Fiscalia General del Estado (Public Attorney Office), headed by Oscar Montes de Oca Rosales took away 11 lots from their legitimate owners to deliver them to Marleny Pat Aban and her son Jesus Enrique Sanchez Pat.


It is to note that Marleny Pat Aban and her son Jesus Enrique Sanchez Pat have never had the possession of the lots they were claiming and definitely do not have any public title or deed that states that they are the owners; in the other hand, the legitimate owners have the public titles, public registry titles and the possession documents since walls have been built, delimitation posts have been placed and the main lot has been subdivided in various occasions through the years without the so called owners making any claims about it.


And while the FGE benefits their “friends”, in the same Specialized Prosecutor Office for Patrimonial Crimes there is another investigative ledger for the invasion of a 5 hectares piece of land owned by Playa Pamela S.A. de C.V.; such invasion was incited by Jesus Enrique Sanchez Pat and some other people; but in this case, the Fiscalia denied the securement despite the fact that in the same investigative ledger there is the property title as well as there are photos and videos of the invasion moment and the statements from the invaders admitting that they forced their entry to the lots and they do not have nor title nor any right to do so.

As a result from the invasion of the land owned by Playa Pamela in May 2020, valued in more than $70M MXP (3.3M USD), their legal representative let the Secretaria de Desarrollo Territorial Urbano Sustentable (Secretariat for the Sustainable Urban Land Development (SEDETUS) who, according to the Human Settlements, Territorial Ordainment and Urban Development law from Quintana Roo State, has the faculties to impede irregular human settlements, nonetheless, this dependency refused to act and to dictate safety measures.


There is several articles in said law that give the acting faculties to SEDETUS and provide it with the legal power to enforce them; i. e. article 206 of said law states that: “The Secretariat and the Municipalities, when knowing and verifying the execution of unauthorized urbanization actions will order the immediate suspension of activities, without prejudice of civil, legal and administrative responsibilities in which the physic or moral, public or private person who has executed them.”


Some other articles that give faculties and order the SEDETUS to act against the irregular settlements are the following:


Article 202. The Secretariat and the Municipalities, will be in charge of the inspection, vigilance and verification of the compliance of this law, their reglamentary rules and other applicable dispositions; to such effect they can adopt and execute whatsoever safety measures needed, determine the infractions and impose the corresponding administrative sanctions […]


Article 203. Safety measures are considered the adoption and execution of dispositions that supported by this law and its reglamentary dispositions, are dictated by the competent authorities directed towards avoiding the damages caused by the facilities, buildings, building sites and actions public as well as private. The safety measures are of immediate execution, they have a preventive character and will be applied without prejudice of the corresponding sanctions according to the case. For the effects of this law, safety measures will be considered as:


11. The temporary or definite suspension, total or partial of the facilities, buildings, building sites, services and activities;


111. The vacating or emptying of buildings;


IV. The demolition of buildings;


VI. The forbidding of acts of usage of machinery or gear;


The public warning through which the publicity media are used over any irregular activity.


IX. Immobilization and securement of objects and materials;